Alongside Dan Whitby who is also a Director, I am the Managing Director and founder of the Action Sports Company, Bolddog Ltd. Dan now runs and manages the team, and over the recent years, he has taken the team to a new level with both the riding and the state of the art equipment. In 2005 Samson Eaton and Arran Powley then joined Dan, who are now the heart & soul of the Bolddog Action Sports company. The team continues to push the boundaries of FMX and lead the way for all motorcycle display teams and freestyle motocross shows. 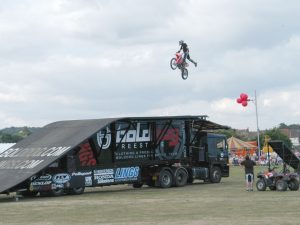 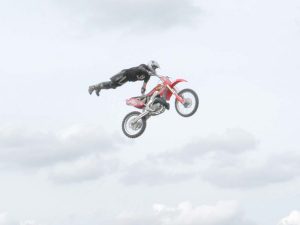 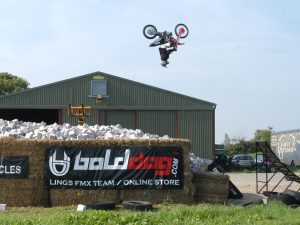 Learning to flip on a full size bike…

Learning to back flip. This was in the first outdoor foam pit we made. Some went better than others!

There are way too many to mention, but recently it has been great to watch all the team, Dan Whitby, Samson Eaton and Arran Powley performing the longer distance, 75 feet back flip. Other highlights of the FMX Team, include breaking world records and appearing numerous times on Saturday night TV Shows including Britain’s Got Talent. 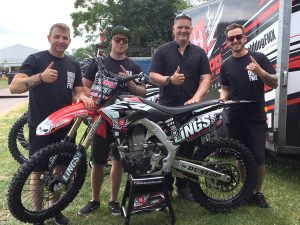 Another proud moment and highlight for me was when we had the privilege of having the Motocross legend Robbie Herring ride in our Bolddog Lings FMX Team for a full season in 2006 – I never thought when I first started racing motocross in 1987 that he would be riding in a team that I had put together!

We now also deal frequently with another hero of mine, Dave Thorpe. He hasn’t ridden our ramps or ridden in our team, but he works for Honda UK and I never thought I’d be sitting in my living room with him discussing sponsorship deals!

Other riders in addition to Robbie Herring to ride our ramps and alongside Dan Samson and Arran include Nate Adams and World record holder and current day Evil Knievel, Robbie Madison.”

In addition to performing at other events across the UK and Europe, in 2011, Bolddog launched the Bolddog FMX Championship – An invitational FMX Professional and Amateur FMX Series. 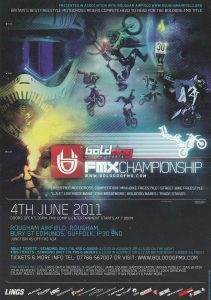 Through out 2002 and 2003, alongside the Bolddog Lings FMX Team, the Bolddog team introduced their clothing range, Bolddog clothing and the www.bolddog.com on line store. 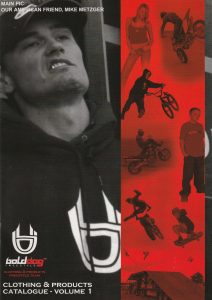 2002 Catalogue Cover Of The Bolddog Own Brand Clothing Catalogue

This Team was the predecessor to the Bolddog Team. In 1996, after racing motocross for almost ten years, I realised I was never going to make a living racing motocross, therefore with the help of Lings Motorcycles I set up Lings Honda Motocross Display Team as a business.

The Motocross Display Team first came about in the early 1990’s, when Paul Barkshire, one of the Managing Directors at Lings Motorcycles put together a basic motorcycle display team demonstration at a local show in Norfolk, over a wooden cheese wedge type ramp. The team comprised of the three brothers, Mark, Richard, and Phil Bunning.

At this time, Lings Motorcycles sponsored myself and Richard Bunning, consequently, in 1994, Paul Barkshire asked me to be involved in the display along with Mark, Richard and Phil. This inspired me so I introduced my own ideas such as bursting balloons in mid air, a basketball jump, and even cross overs through fire. So following on from then, at the beginning of 1996, Lings and I teamed up to put on a more professional show. Therefore, the Lings Honda Motocross Display Team was officially launched as a business, and I started trading in January 1996. Lings supplied the team with all the motocross bikes, the quads and a generator. The team has run on this basis up until now, booked every single weekend during the summer months. 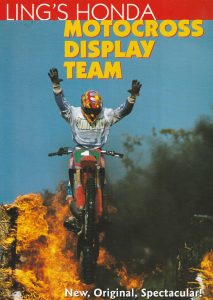