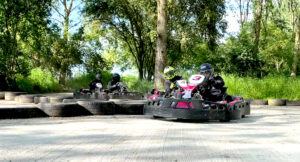 Our facilities include a 500 metre long, 10 metre wide runway strip. These photos feature the street bikes and Mark McCann. The foam pit has multiple uses, it’s been used for numerous rehearsals in the past including exiting from a bike mid air and general falls.

Both the full size and mini-bike Foam Pits. Here the foam pit was taken to a Film Studio, to jump the Captain America Motorcycle into. The Bolddog Gpound Off Road Course and Motocross Track is suitable for off road vehicles, motocross bikes and mountain bikes. Please note this is not open to the general public. Guy Martin spent many hours at the Bolddog G-Pound during 2019, training and filming for the TV programme, Guy Martin’s Great Escape, to reenact the same motorcycle jump that was done by Steve McQueen’s Character in the iconic film, “The Great Escape”.

Dan Whitby on the G-pound Off Road Course, driving the ZFORCE 1000 Sport EPS, on lone from Lings. This is the Bolddog Freestyle Motocross Compound, this can be hired as part of the off roadcourse. Pro FMX Riders here are Dan Whitby and Arran Powley.

Another photo of the Freestyle Motocross Compound. Please note this is not open to the general public.

Within the 6 acre Gpound Woodland location are over 20 trials sections, ranging from Novice to Expert Sections. Here at the Gpound, Katy Bullock gives Guy Martin a trials lesson, in preparation for his “Great Escape” jump. Here are a couple of the more technical trials sections being ridden by former Eastern Centre Trials Champion, Jack Austin The Bolddog Gpound Unit Base includes a large concrete parking area. In this photo, British Street Bike Champion, Mark Van Driel and his teammate, Toddy use the area to practice!