Precision car, van, motorcycle and digger driving, near misses and crashes. Small part as “Scooter Rider Thief”. Stunt double for Andrew Scarborough for general stunts / fights and a car knock down onto bonnet and window screen, then car stops so I’m thrown down a bank, then roll off 30ft cliff to boxes, then rugby tackle off a 12ft ledge. Also double for “Graham” for head on near miss. Part as “Digger Driver”,  then fight with “Graham”. Precision driving double for Jonathan Wrather “Pierce” including handbrake turns. Precision van driver for crash into “Pierce’s” parked car. Driving double for Danny Miller “Arran”, handbraking etc. Motorcycle lay down crash. Also doubled for John Middleton “Ashley”. Anthony Quinlan, “Pete” enduro motorcycle riding double, jumping and chase, jumping off cliff edge into water. Also “Pete” double, hanging upside down from the top of a viaduct. Part as a sniper getting washed away as river banks burst.

Also working as the stunt co-ordinator for two episodes.

Stunt double for Andrew Scarborough, “Graham”, for general stunts, fights and falls. Including a car knock down onto a car bonnet and window screen, then thrown over 30ft cliff.

Here are the crashes I did in this crash sequence.

Also covering as the stunt co-ordinator on a number of different occasions, looking after the safety of actors for general fights etc , including choreographing the boxing fight for the boxing scene on that episode.

On Grantchester, choreographing this fight and working as the stunt co-ordinator for this boxing scene.

Small part as a Policeman, precision driving, skidding to a mark, precisiong then a fight.

Also worked as co-ordinator on 1 episode.

Also working as a stunt co-ordinator on a couple of episodes looking after the safety of actors.

Precision driving double for William Ash, “Mark Sealy”, including a head on near miss, then a pipe ramp car turn over crash.

Motorcycle riding stunt double for “Peter Weir” for a lay down crash.

Also working as a stunt co-ordinator on three different episodes for general falls and fights.

For BBC’s Casualty, a “cannon” car crash, driving double for Bob Barrett, “Sacha”. The crash sequence was set up by stunt co-ordinator Derek Lea, and co-ordinated on the day by Jim Dowdall. Bickers Action were the Stunt Engineers.

Lorry jack knife crash – this was done by actually crashing the lorry into the barriers, then Bickers Action pulled the trailer. I also crashed the 4 x 4 here into the ambulance.

Not Going Out – Season 10 Christmas Special 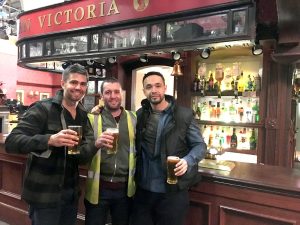 Part as “Sam”, the digger driver, having a pint in the Queen Vic

Driving double for Tamzin Outhwaite “Mel” for a rear cannon crash into a parked car. Also precision lorry driver, driving through smoke as if I have run over “Mel”.

Part as “Sam”, the digger driver. Also double for Steve McFadden, “Phil”, driving the digger smashing up “The Car Lot”. Then car driving double for “Phil” dragging all the tools from “The Arches”.

Also working as the stunt co-ordinator on a number of different episodes, including car and motorcycle stunts and fights.

Oliver Lansley, “David Capstone” stunt double, as parcel bomb explodes. Own part as bare knuckle boxer then getting knocked out.

Also working as the stunt co-ordinator for one episode for general falls and fights.

Precision motorcycle riding double for “The Doctor”, Matt Smith, riding at speed for the Shard sequence.

Part as the “Irish Boxer” getting knocked out by Jack Rowan, “Bonnie”.

Part as a boxer in a boxing fight against Henry Garrett “Jay” getting knocked out by him, also punching James Nesbitt “Harry” then get head butted by him. Part as motorcycle rider gunman, firing gun at “Harry” and Joe Blakemore “Sammy”. Precision Lorry driver.

Scooter riding double for near miss for Simon Callow, “Henry”. 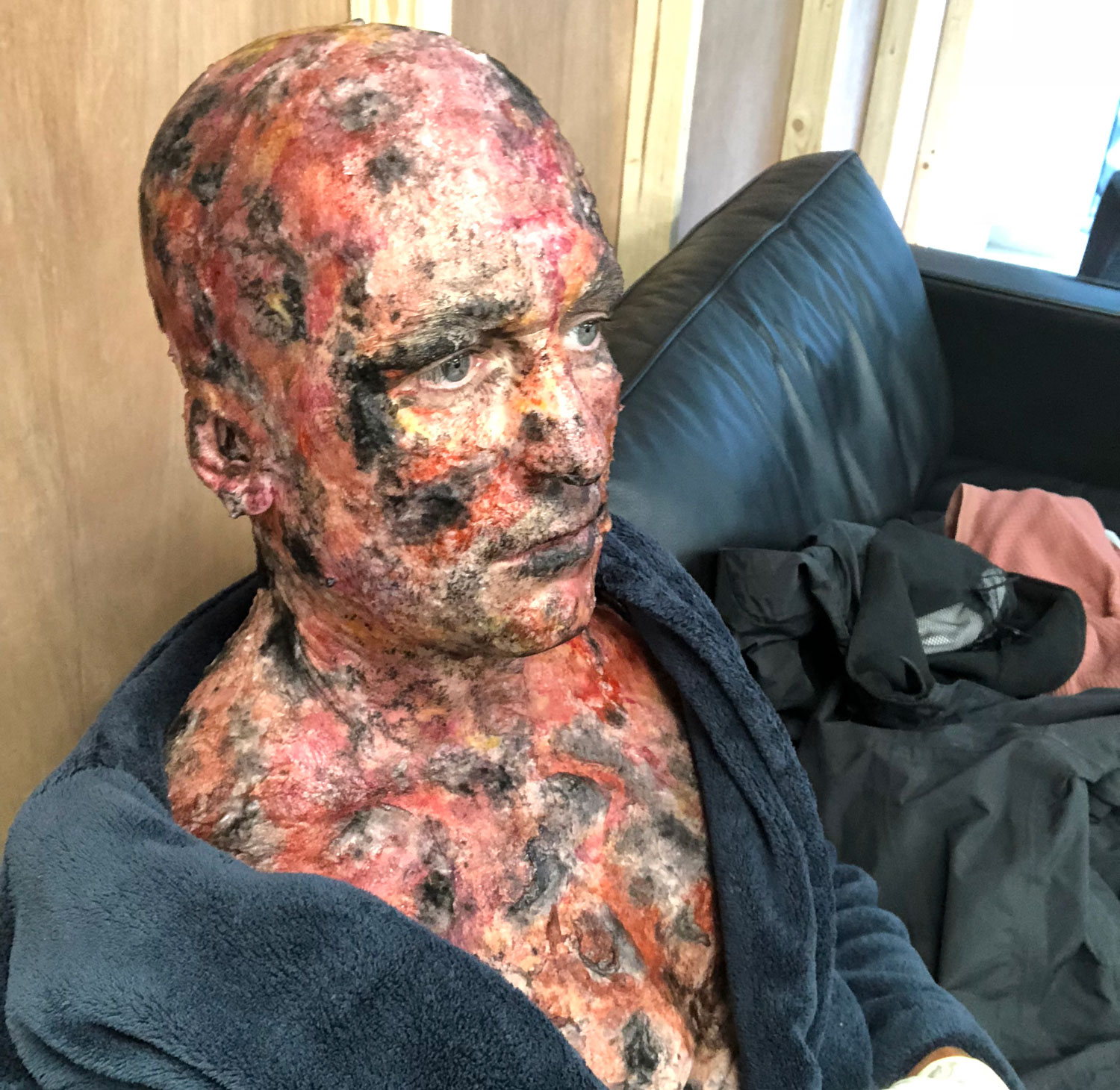 Behind the scenes of the bare knuckle boxing fight on Victoria.

Car driving double for Jeremy Strong, “Kendall” for deer near miss and crash through.

The main actress in this TV Episode of Pure, is imagining that everyone in her thoughts is having an orgasm, including me on the bicycle, dear oh dear, it was a very strange job!!

Stunt performer. Part as a skin head, including being glassed.

Stunt double and precision driving double for Marc Warren for a chase, near misses then getting stabbed.

In The Cloud – 1 Episode

Double for Kulvinder Ghir, “Cyril”, as passenger falling off a tandem bicycle. 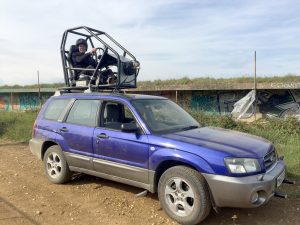 Pod driving with the actors in the car, on The Tunnel.

ND part as a “Beszel Border Guard”, getting shot. Also an ND driver.

Man in an Orange Shirt – 1 Episode

Bicycle rider in race then crashing. Precision driving. near miss with car and bicycle.

Motorcycle riding double for Matt Bardock, “Davey” in a chase across across beach also jumping the motocross bike.

Double for actor, hit over the head with ornament. 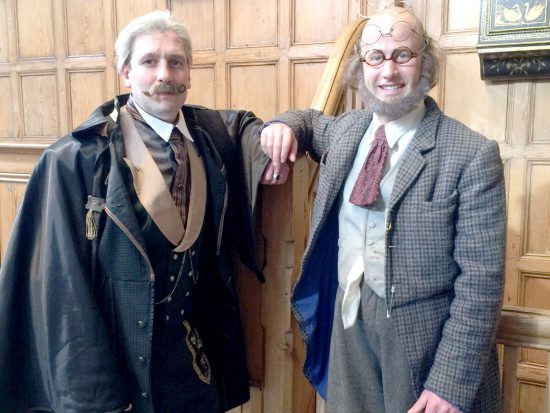 Part for fight in a police station.

ND part as a cyclist.

Precision car driving double for Nathan Stewart-Jarrett, “Iddon” as T-boned from the side. 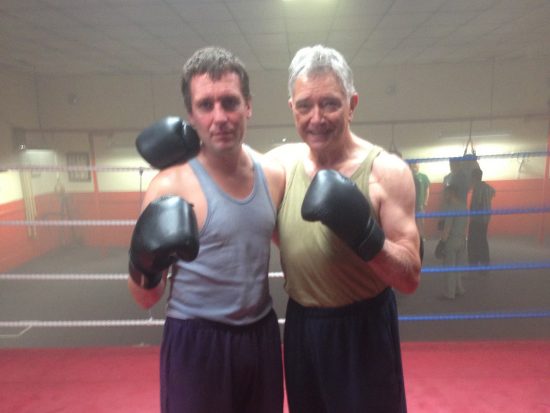 Doubling Nick Pickard, “Tony”, jumping from a ship in Barcelona.

Part as boxer against Nigel Travis, “Michael Maddock”, getting knocked down.

Small part as a thug fighting an actor, Daniel Betts.

Stunt performer for general fights, as a guard, as an Urbino Soldier. Double for Blake Ritson, “Riario”, hanging from cave roof by one leg.

Part as boxer against Theo Barklem – Biggs, “Jake Milner”, getting knocked down to canvas.

Part as Vampire in fight, being stabbed, Aldo double for Damien Malony, falling through a table to ground.

Precision moped riding for Nico Mirallegro, riding at speed with actress as pillion.

Part as a beater that gets shot in the leg.

Just Around the Corner

Stunt performer, fight in a gang.

Stunt performer, small part as punter in fight in a bar.

Stunt performer for general stunts, fights, riots. Precision motorcycle, moped, bicycle, car, truck and van driving. Motorcycle, bicycle and car crashes and near misses. Chase sequences. Handbrake turns. Moped riding double for Staten Eliot, in chase, finishing with lay down. Small part jumping from balcony onto car roof then ground. Small part in night club, as balcony collapses. Motocross riding double for Adam Montgomery, riding on walk ways, down steps, on waste ground and jumping. Did two Live episodes of The Bill, for one I was used as a double for the last part of a fall from a balcony. Then for the other Live episode, I was the stunt double for Ciaran Griffiths, “PC Gary Best”, doing a rugby tackle off a building into boxes. Stunt double for Daniel MacPherson for general stunts including running into Thames, swimming under water to rescue passengers in sunken car. Fight, played own part as male nurse with dialogue. General Stunt-double for “Eric Sykes”.

Stunt double for Ciaran Griffiths, “PC Gary Best”, for a Live Episode of The Bill.

Small Part as a “Drug Gang Member”, jumping from a balcony to a car roof. 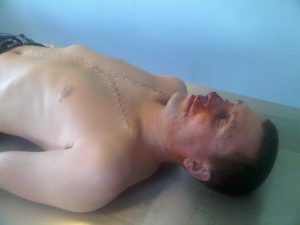 Part as a policeman, “PC Nelson”, motorcycle riding, then tackled into ditch, breaking my neck, then coming back as a “ghost” raising from the bath water. On another episode I was precision moped riding. Also on another episode as a motorcycle stunt double for a lay-down crash after being knocked off the motorcycle by Trevor Eve.

Precision driving, double for “Hoorsten”, being T-boned by another car. Small part as crime boss as fight breaks out in a night club. Small part as bound and gagged man in boot of car, thrown in the back of a lorry.

Stunt double for Tom Riley, “Gavin” for fight, thrown across table onto floor and into a drawing board.

Stunt double for Matthew McNutty, “Danny” falling backwards out of a train carriage.

Part as a bare knuckle boxer, then in another episode a general stunt performer as a soldier.

Part as a bare knuckle boxer in Foyle’s War.

Car knock down on Trial & Retribution that didn’t go quite to plan – I ended up going through the window screen. Stunt double for Jamie Sives, “Kevin Reid”.

Part as a trail bike rider, 40ft jump down into garden, then laydown in trees.

Part in Boxing fight at Yorke Hall. Gary Stretch was one of the actors in the episode. 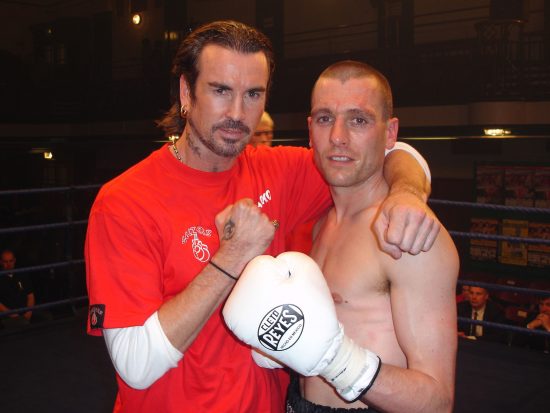 Photo here with Gary Stretch, who was one of the actors in the episode.

Stunt double for “Paulo”, Joan Collins hits me over the head.

The Man & the Mouse.

Bicycle stunt double, riding bike at speed into a lake.

Motorcycle stunt double for both Jenna Russell and Oliver Milburn riding both an AJS and Norton at speed through country lanes.

Stunt double for Robert Beck, in explosion in garage and rescuing girl from fire.

Playing a part as “John Taylor”, and my first (and only) screen kiss ha ha.

Stunt-double for car and motorcycle.

Stunt double for fight for “Martin Walsh” and small part in a fight as “Liam’s Mate”.

Stunt double for Nigel Havers. For a driving near miss, and general stunts.

Own part for a fight.

Motorcycle get away rider, riding at speed with passenger down paths.

“Johnny” double for motocross race jumps and a crash.

Driving double for Kerry Fox, “Jessica” for a head on crash.

Every Woman Knows A Secret